New technology in the TV industry, laser TV may become the next boom

In China, LG Electronics’ laser TV products have been on the Chinese market for more than a year, and the product categories have also expanded from the initial one or two to the price ranging from 13,000 yuan to 69,000 yuan. At present, some LG laser TV products are being promoted on the Jingdong Mall platform, competing for the “golden nine silver ten” promotion season.

Here, Samsung’s new laser TV released 2 ultra-short throw 4K laser TV products for personal home theater application scenarios. The first batch of products will be sold in the local markets of Europe, the United States and South Korea, and will not be ruled out in the Chinese market in the future. As we all know, Samsung and LG, the two major Korean color TV production giants, have been leading the development direction of display technology in the global color TV market in recent years. Samsung leads the quantum dot technology to participate in the next-generation display technology battle, and LG leads the OLED technology to participate in the next-generation display technology battle. 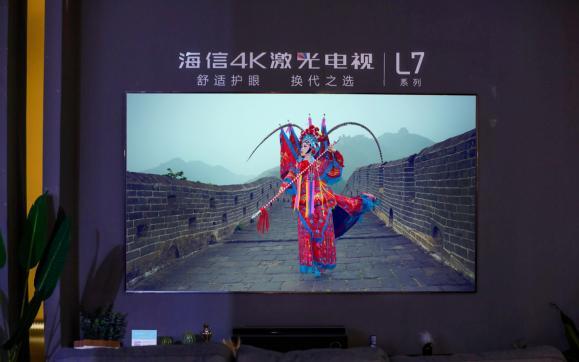 Now, the two companies have laid out the laser display technology, and quickly launched related products to seize the market, and made new market adjustments to the next-generation display technology, which once again triggered heated discussions in the industry. In fact, as the only category with positive growth in China’s color TV market in the first half of this year, the performance of laser TV in the Chinese market in recent years can be said to be “in the limelight and the same.” Previously, data released by the China Electronics Video Industry Association at the “2020 Global Intelligent Display Leadership Summit” showed that the color TV market fell by 9.1% in the first half of this year, but laser TVs have grown against the trend and become the only category with positive growth. Among them, Hisense Laser TV sales increased by more than 33%.

LG Electronics, which launched a laser TV production line many years ago, began to launch a laser TV production line in Europe, the United States, South Korea and other markets last year, and also launched a laser TV production line in China. From Samsung and LG entering the laser TV market one after another, to Hisense leading the formulation of the laser TV national standard, a series of actions have been taken behind it. Industry insiders predict that with the opening of the “Golden, Nine, Silver and Ten Double 11” promotion seasons, a wave of high-quality, big-brand, and new technology consumption will be fully seized. In the first half of this year, laser large-screen TVs, the first choice for high-end consumers, will also usher in new A round of consumption boom!